The Bartkira project (pop culture mash of the Akira manga redrawn with characters from ‘The Simpsons’, here’s the tag to check everything about it on the blog so far) just keeps getting better; there’s been gallery shows all over the world – including Tokyo – tons of press and Akira creator Katsuhiro Otomo’s even looked it over, apparently. Now there’s going to be another print version (the first was an exhibition companion from Rotten Oak) out through a mainstream channel, which is cool:

Published by Floating World Comics and Nucleus, Bartkira: Nuclear Edition is a full-colour, hardback book with just some of the 6-volumes-worth of comic pages reproduced inside, including some of mine from the project! Like, ohh, this kind of thing:

There’s a startlingly involved blog entry on my pages from the book here. Also in the Nuclear edition are a whole gang was amazingly talented indivuals including Warwick Johnson Cadwell, Tom Neely and more. See the full list here.

The book will be out in comic shops worldwide on the 30th of March. Here’s the Previews listing for it. If you’d like a copy, please get in touch with your friendly local comic shop (preferably an independent one like Gnash Comics or OMG Comics near me) and let them know. It might speed things up if you give them its code – JAN161028 – but that’s not essential.

As part of the launch there’s going to be an exhibition at the Nucleus gallery in Los Angeles that runs from the 9th-24th of April, with an opening shindig on the 9th from 7pm-10pm, if you’re in California!

So if you’ve not seen anything about Bartkira creep into your feeds yet, do seek it out, you can read it online for free, check the twitter hashtag or check the tumblr tag. It’s a truly amazing… Happening; it really makes you realise just how good a shape comics, illustration and the dizzy sense of genuine community are in these days. It’ll only get better too.

Some sketches I drew live and dangerous for folks at Plymouth’s ‘Dev-Con’ today:

Link from the Legend of Zelda! There I was with a couple of sketches in front of me wondering what to draw next and then a couple of people dressed as Link walked past…

Fionn from the Fionn Mac Cumhaill stories I’m currently pulling an outline for a graphic novel together from. The visuals aren’t set yet, but this is a tryout for a young (and fairly New Wave-looking) Fionn.

Here’s Sabha, another character from the Fionn-filled ‘Fenian’ stories. I wasn’t really warmed up when I drew this one so I think the features of the face look a bit odd…

Deadpool! There are many deadpools drawn at cons. I’m getting to a stage now where I can use it to channel Yoji Shinkawa – the Metal Gear game series concept artist – a little bit… All army dudes, body suits, protective gear, pouches and gizmos. And samurai swords (or is it a ninja sword because Deadpool’s supposed to be a ninja..? So they should be straight instead of curved, right?) Yes, just like Metal Gear.

This guy’s from the Fallout 4 game trailer. I get more requests for game characters these days, it’s all good, these are the characters that people’s imaginations live with these days, they just don’t happen to be on newsprint.

Spider-man. Man, those web patterns on his costume are fiddly.

Mikasa from Attack on Titan.

A “fairy tale princess” for Diana Mizuru (whose picture book ‘The Gingerbread Man’ is really good!) impossible drapery on dresses that mix kinds of ages of medieval costume are fun!

Batman. Is he mired in the agony of being a creature of the night, a melancholy that wraps itself around him like a dark cloak? Or has he gotten muddled up while changing his bat-duvet cover..? You decide!

Claire from Resident Evil / Biohazard. Only now do I realise she looks a bit like Lara Croft. Ah well. I actually had reference for this character provided in the form of an action figure. I think that was a first.

Once you get into the flow (hoho) of using a brush pen, the art comes out really quickly. Lines are down in no time and then going into detail with such a bold line with such variety of weight just seems to muddle everything up, so you skip it. It really keeps you drawing fast and ready to blitz on with the next sketch.

Some Dredd-drawins from the Lawgiver Mk. II con…

Since it was a 2000AD con (naturally) and 2000AD’s about more than Dredd, I thought it was time to draw some Mills-verse stuff. The ABC Warriors and the Nemesis the Warlock shared universe was the stuff I got the most out of reading 2000AD, so here’s Nemesis the aforementioned warlock…

Blackblood from the ABC Warriors. He’s a naughty robot with a pirate captain / skellington / snake robot styling thing going on. What’s not to love?
I idly draw the ABC Warriors every once in a while when I should be doing other things. Some time in the future I’ll have to put up a great blog entry of scanned sketchbook pages they’ve appeared on over the years…

There were other sketches too, but putting them all up would just ruin the mystery, wouldn’t it?

I’m off to the futuristic hive city of Bristol* in a couple of days to exhibit at what’s going to be a proper amazing little UK comics-comic convention: ‘Lawgiver’ Mk II, a Judge Dredd convention. Also there will be top local sorts Jock, Dom Reardon, John Spelling, the constantly refreshing Rob Williams, the constantly refreshed Boo Cook, the refreshingly fresh Dave Taylor, the (still) fresh-faced Dylan Teague and a ton of other top-flight UK comics talent.
(People who’re good at seeing the interconnectedness of things might sense a theme developing here from my last post. Ah well.) See you there if you’re going!

A couple of images I contributed to the 22 Panels Falmouth Comic Art Show‘s poster this year. The name of the event comes from comic artist Wally Wood‘s cheat-sheet of comic panel layouts, so this year the poster for the event is going to follow suit… Artists attending the event are drawing their own version of Wood’s panels. For what it’s worth, here are mine…

So there’s a Cornish twist with the Cream Teas sign…

And in this one the venue‘s being spied on by somebody who looks suspiciously like the event organiser (on the right)… The other guy (on the left) was me trying to draw a guy like Wally Wood drew in his version, but for some reason it ended up looking a bit like Dom Reardon…
While I was referencing this on Google Street View, it occured to me that these two peeping Toms are actually in the Chinese restaurant across the road. (Good food, great building.)
I’ve been getting more and more into using a brushpen for linework recently. Sure it’s messy in the hand of a chimpanzee wearing human clothes like me, but at least it’s got some life to it. 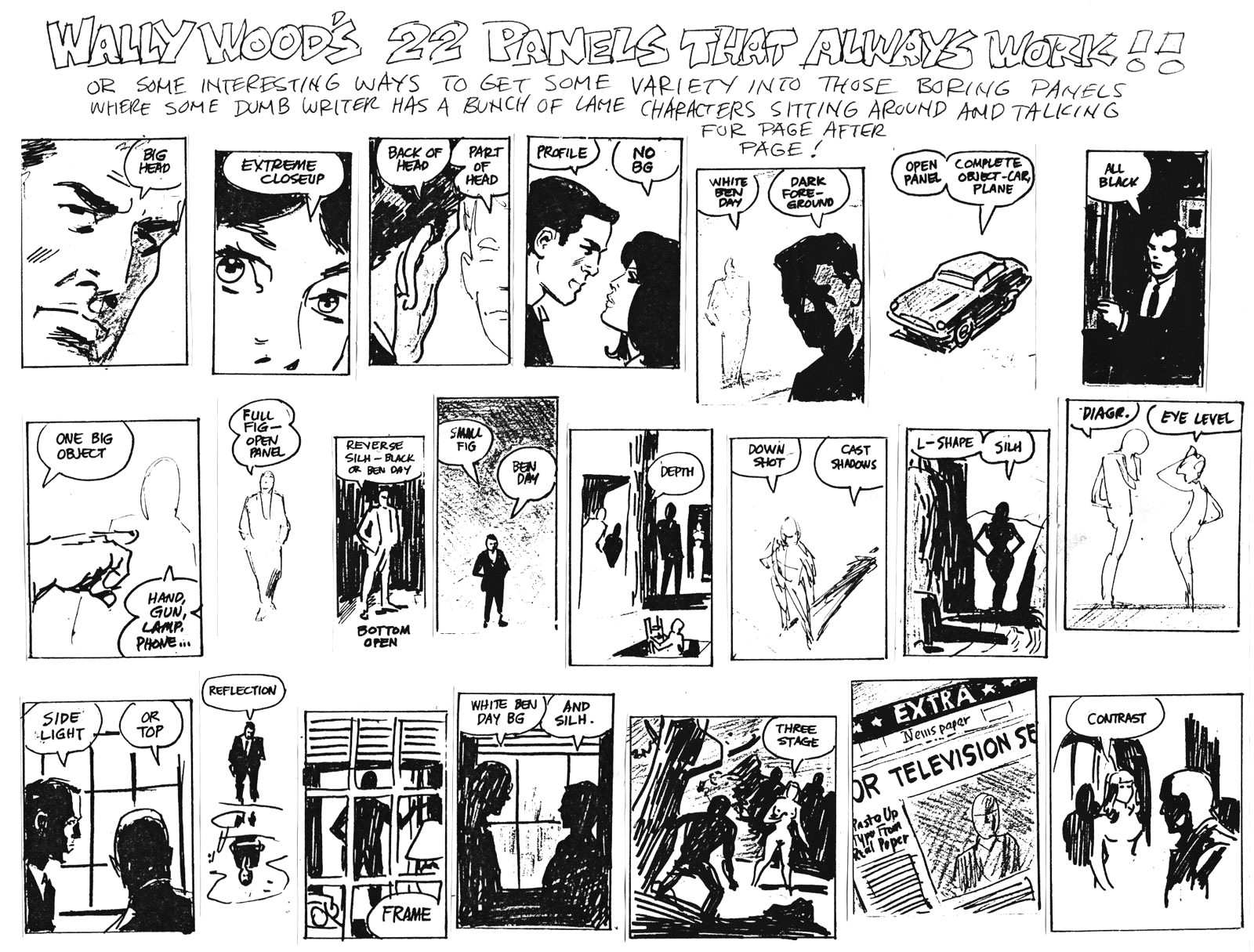 Also on the final poster are going be frames drawn by such luminaries as Paul Grist, Tiernen Trevallion, Henry Flint, John Spelling and Jack Teagle, among others… Keep ’em peeled.

An Attack on Titan type doodle.

Link from the Legend of Zelda.

This was a laff – a Silver Age Thor on an Apple iPhone. (Which I then spoiled by spelling ‘Forsooth’ wrong. Man!

Robocop and Judge Dredd. It has been pointed out by more observant people than me that the first Robocop film was the best film about Judge Dredd that didn’t actually have Judge Dredd in it. Until the 2012 ‘Dredd’ film came along, anyway.

I ended up doing loads of portraits today, which are cool and I have copies of, but I won’t go putting them all up here, ‘cos it’s slightly odd for the subjects…

Thor! Shiny helmeted and big of hammer! Anything’s better than a bloke in spandex. Anything!

The Green Goblin from Spiderman. My god, he’s wacky for a mainstream comic book character. I had great fun drawing ‘im!

Batman, once again looking surprisingly effete. That was the idea, anyway.

The King of the Old Ones from the Power of Five series. (With a page with him on behind.)

A quick doodle in the inside cover of an Evil Star graphic novel.

Levi from the Attack on Titan manga and anime series.

Goblins from the Wild West. Because you don’t need an excuse for goblins.

X-23 from Marvel comics, she’s like a teenage girl version of Wolverine, as far as I can tell.

And a lil’ Fionn and Sabh to round off the day.

Some snaps some the workshop I did earlier today at the Drake’s Circus branch of Waterstones in Plymouth. It was great fun and I’d like to thank everybody who turned up and made it such a good way to spend an afternoon!
I only thought to photograph some bits of it, as I was either too busy, drawing away or just lost in waving at passing members of the public.

Some of the drawings I coaxed out of people who just thought they were out shopping!

Dave Hooper and I jam out a comic with a Noir theme… Me, I like a noir theme, Dave, he lives a noir theme, and has the hat to prove it…

Jam comic by – in order – Diana Mazuru, me, Dave Hooper, Rob Cross, Tincuta Moscaliuc and Jake Rowlinson. We were all warmed up by this stage…

Another couple of satisfied customers! Dad here is a graphic designer and draws a mean cartoon cat (which is in the collection above!)

My totally top gang of core comickers, (from left to right) Tincuta Moscaliuc, Diana Mazuru, Dave Hooper, Rob Cross, Craig Richards and Jake Rowlinson (dressed up as Frodo Baggins from Lord of the Rings in honour of World Book Day, no less!) thanks folks!

A little update about an event coming up really soon: I’ll be at the Plymouth branch of Waterstones booksellers for the annual World Book Day shindig on Saturday the 8th of March!

I’ll be there from 11am to 3pm doing an informal workshop on drawing comics and illustrating, doing sketches, probably chatting about Evil Star a bit and answering questions and such… Come on down if you’re about.
And if you cant make it, you can still watch or participate in some of WBD’s amazing list of things happening internationally, and online too! I’m really chuffed to be involved in it all!

Just a quick blerg to harp on about an event celebrating the release of Evil Star: Dom Reardon and I are going to Gnash Comics & Graphic Novels in Ashburton on Saturday 8th February from 4-6pm. We’ll be a-signin’ and a-sketchin’ and a-chattin’ to nice comic folks. Here’s a poster I knocked up for the do:

Author Anthony Horowitz has provided some signed bookplates for the event, so even though he can’t make it down from London to the wild of the edges of Dartmoor, the bookplates will be, so that’s kind of cool.

If you’re a Facebooker, there’s an Event page for it, and there’s some more info on Gnash’s website.
If you’re within striking distance of the shop and you’ve not gotten around to visiting it yet, do try and get down there, for it’s size it’s probably the best comic shop I’ve ever been in, and it carries books you’d have to go to London for otherwise, all based in a tiny little town in the countryside!

See you there if you can make it!